A request was made to post a picture of the winter party cooking crew to the website, so here we go. The first image shows the masterminds of the operation, John and Paul. 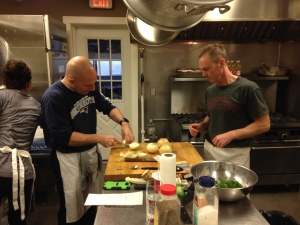 The next image shows Michelle and Diane. 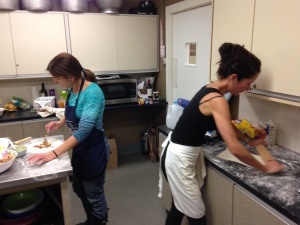 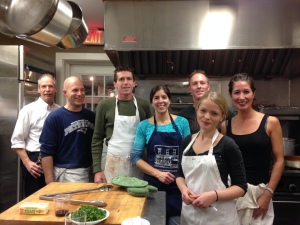 The dinner setup and meal required careful planning and preparation, and the execution on party day was hectic, nerve-wracking business. Thanks to Joyce for taking this last picture!

Happy New Year!! Here is the December race results. Congratulations to all those who raced this month! Well done Mike Tammaro, Brian McNeiece, Tim Kobylenski, and Michelle San Antonio! All placed in their age group at the December 7th, Jingle Bell Beach 5k Run. Representing the NRA 2nd Generation, was Dante San Antonio. Dante came in 5th for his age group. Some top performances at the 10K By the Bay in Newport by Vinny Hey, Claire Gadrow, and Linda Hurteau. Congratulations on a great race. Nooseneck was covered by both Mike Tammaro and Murray Norcross. In case you missed the email here are some highlights. Congratulations to our winners, two-time champ Kaela O’Neil and five-time champ Matt Pelletier, each smashing the previous course  records in the female and male divisions, respectively.

On December 21st, the NRA and friends, headed for the trails.  The South County 4th Season Race Series is a sequence of off-road trail running races held throughout the winter months. Check out the series here. Each race offers awards and raffle prizes to participants of that event. All races raise awareness of local recreational resources, charities, and small businesses.  The next race in the series is Resolution 5k Beach & Trail Race : Sun, Jan 11, 2015 – REGISTER ONLINE. Hope to see you there!!

Summary of Race Results for December

January 3, 2015, Wickford, RI. Narragansett Running Assn holds its winter dinner at the Wickford Yatcht Club. This year the group was treated to a special sit down dinner prepared by NRA President Michelle Theriault San Antonio, former NRA President Michael Tammaro along with special chefs John Brindamour and Paul & Diane Senecal Over 55 NRA members and their guests attended. H’orderves were crab cakes, bacon wrapped scallops, oysters on the half shell, spring rolls, and seafood stuffed endive. The soup was a delicious squash soup topped with sour cream. The main entrees were delicious: chicken, beef, or vegetable tart. Dessert was lemon cookies and cranberry-chocolate brownie alamode with chocolate sauce. We can eat meals like this because we are runners!! A great evening was enjoyed by all. 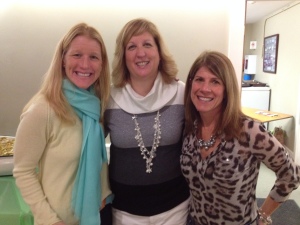 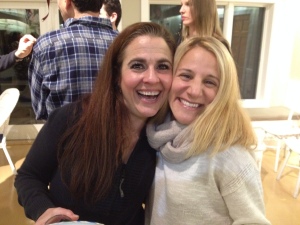 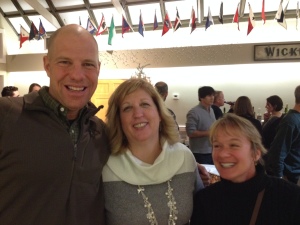 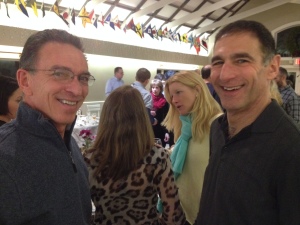 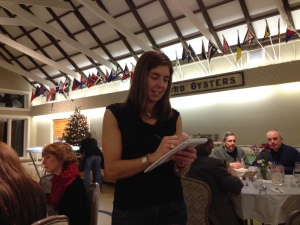 On Sunday, 12/28/14, Brian and I ran from downtown Coventry to Rte. 102 via the Washington Secondary Trail: an impressive new multi-use path that connects Cranston to Coventry along an abandoned rail corridor. Our route was an out-and-back, with the turn-around point being about 0.3 miles west of Rte. 102: at the Summit General Store in Greene, RI. 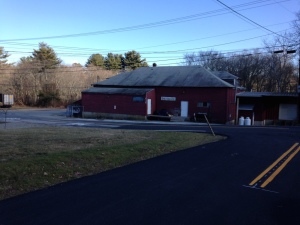 From the turn-around point, we saw that the paved path continue west, but how far west? We set out to explore this question on Wednesday, 1/31/14, meeting at the Summit General Store at 11:33am to run west to the CT border. There was designated parking for path users, which averted any anxiety that might have come with utilizing the store parking. 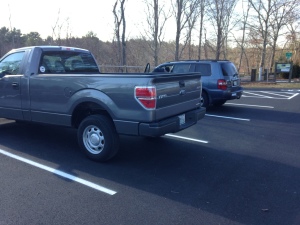 We stepped out onto the path, and turned west to find an immediate answer to our question: The paved path ends about 100 meters west of the Summit General Store. 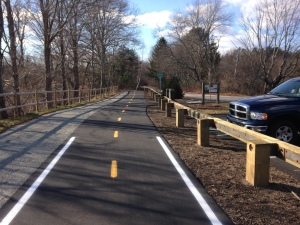 The end of the paved part of the Washington Secondary Trail

We had been looking over satellite images since Sunday’s run, and it was clear that, paved or not, the trail continued west, so west we went. The path was wide and clear, and usually straight and level, as far as the eye could see. Some sections contain a regular pattern of bumps, separated by about 5-10 meters, and with heights varying from very small to about one meter. These so-called “doop de doos” were initially annoying, then funny. Is there a training benefit to running this terrain? We don’t yet know the answer, but the soreness in my glutes might be a clue. 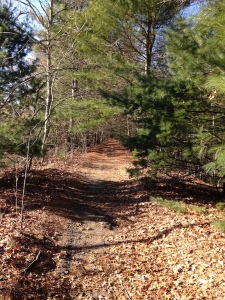 A few short sections were flooded out, forcing us to run around the frozen edges of the puddles. Several times we had to abandon the trail altogether, but at these points there were clear secondary trails that ran alongside the main path. 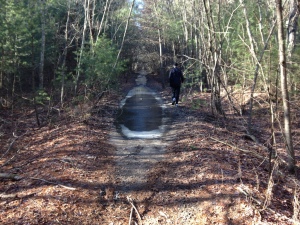 We encountered an obstacle at about 2.2 miles: an abandoned iron bridge. The bridge once carried trains over a river, but only the truss remains. We tiptoed carefully across the truss (not looking down). In the photograph, you can see a granite stone that has somehow fallen onto the truss. The stone bears word “ZEPPELIN,” written as graffiti.

The next bridge crossing occurred at 3.3 miles. This bridge was much higher than the Zeppelin bridge (approximately 60 feet high compared with perhaps 15 feet) and spanned a more substantial waterway. 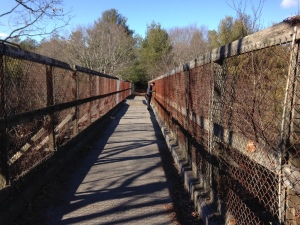 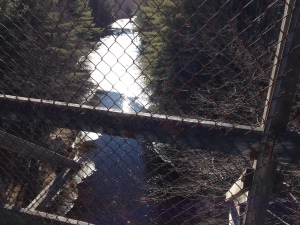 Looking down from the 3.3 bridge

A train cannot climb anything but gradual hills, so railways are necessarily quite flat. As a consequence, the railway bed is often built up quite high in low areas, offering scenic views of the surroundings. The photo below was taken at about 3.7 miles, where Carbuncle Pond can be seen beyond the marshy area. 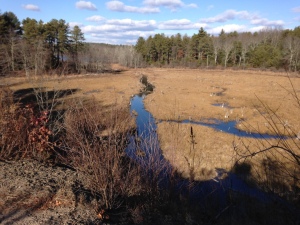 A view of Carbuncle Pond from the heights of the trail.

We estimated our pace to be about 8 min/mile, and, from the time, we estimated that we were closing in on the CT border. We expected no “Welcome to Connecticut” sign, so our plan was to was to turn around when we reached Plainfield Pike, which we knew to be just across the CT border. We first spied Plainfield Pike through an opening in the trees that, in an erie way, appeared perfectly circular from a distance. Looking through the circular hole and seeing cars pass confirmed our conjecture that we had, indeed, passed into CT and wer 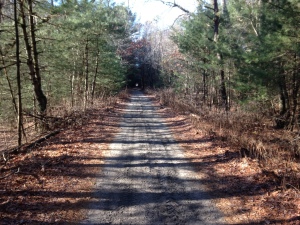 Plainfield Pike in the distance 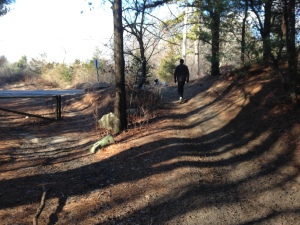 We decided to cross Plainfield Pike and continue on the path for a few more minutes, turning around at 0:47:00 on the watch. On the way back, we stopped in Greene (RI) center and took a few pictures. 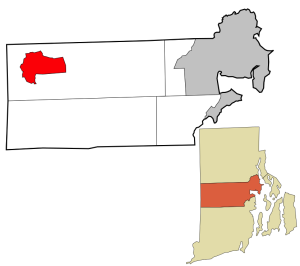 We learned, from a monument placard, that Greene was once a rail stop along the Washington Secondary Trail, with the rail built in the early 1850s. 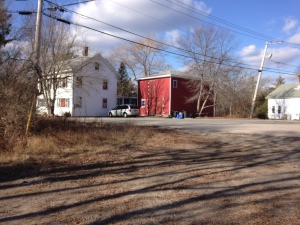 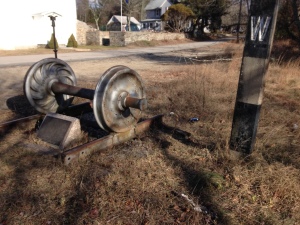 Monument to the rail

We completed the return trip in fewer minutes than the outbound trip, and called the total distance 12 miles. The Summit General Store claims to be Rhode Island’s only real general store, and we saw no reason to disagree. There was no indoor seating, but they did serve food and coffee, so we each purchased a muffin and coffee, got in our cars, and drove home. (The muffins were delicious, by the way.)

Out and back on the bike path from Sweet Cakes to the Train Station.
A great way to start the new year!! 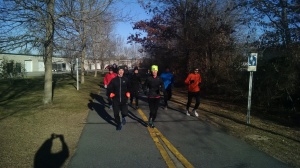