Race Review: For runners who want a challenge, the annual 18K Nooseneck Run, presented by the Narragansett Running Association on the 26th of December each year, is a must do! Hosted out of the Tavern on the Hill in Exeter Rhode Island just off Rte 3, the course is a large loop with varying topography of down and up hills. Mid way through the course, runners turn onto a dirt trail with a steep grade and an extended half mile climb. Mike Tammaro, President of the Narragansett Running Assn, marks the course with mile signs and plenty of orange cones so runners do not get lost. Ample water was placed for thirsty runners at the foot of the steep dirt incline described above. This year’s run was well attended with several running groups in attendance that included the Rhode Island Running Club, the Tuesday Night Turtles and the NRA. The weather changed dramatically during the race. At the start, the air was still and cold. The ominous grey clouds overhead gave the appearance that snow would fall at sometime during the afternoon run and it did. By mile 7, a mixture of sleet and snow pellets began to fall on the field of runners making the final push up the remaining hills slippery with very little traction. Participants were definitely challenged not only by the terrain but by the changing weather conditions. All runners later enjoyed warm food and beverages inside the Tavern on the Hill, where Mike Tammaro made presentations to the various winners. In the attached photo, Ms Tammy McNiece is seen signing up for her race bib with Mr Mike Tammaro looking over the great room at the Tavern on the Hill. On a scale of 5, this annual race earns Five Stars, one each for the challenging course, the uncertainty of the weather , the expertly marked course, the one-of-a kind nature of this race, and the after race gathering. Photo and Race Review by NRA member, Murray Norcross 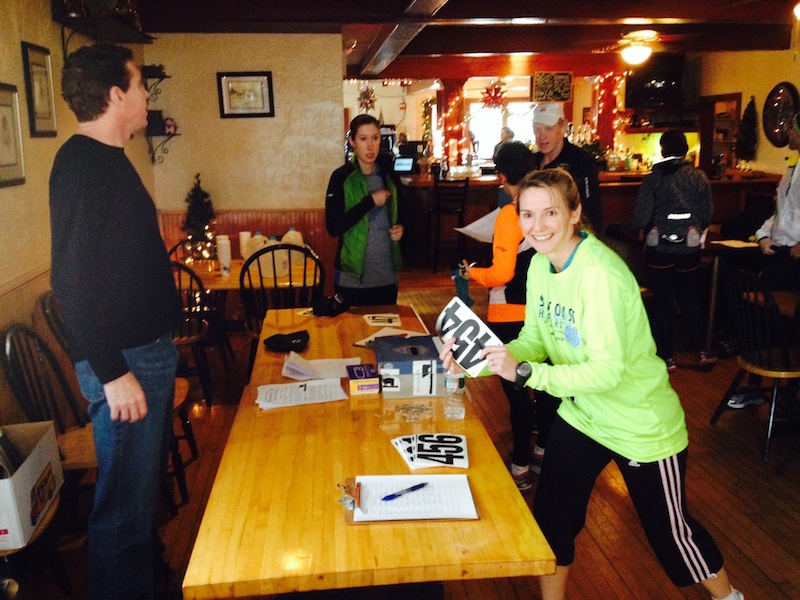